Comedian, I Go Dye, has written an open letter to President Buhari, asking for the release of the publisher of Sahara Reporters, Omoyele Sowore.

In the letter, I Go Dye reminded President Buhari of when he overthrew the government of Shehu Shagari in 1983.

Recall that Sowore was arrested in the early hous of August 3rd following his plans to lead a Revolution protest against the Buhari-led administration scheduled on August 5th.

YOUR EXCELLENCY @muhammadubuhari
ON BEHALF OF THE VOICELESS PLEASE FREE SOWORE AND MAKE NIGERIA BETTER THAN YOU MET IT.

Nigerian’s predicament has been long frustrated on us, even then as a young youth like sowore, President Mohammadu Buhari you were 41 years in 1983

When you overthrown Shehu Usman Aliyu Shagari the first democratically elected President of Nigeria on December 31, 1983 our nascent democracy was truncated, but you had your reservations based on the 1983 coup, which aggregated some of the decisions and policies you instituted after taking over as Head of State. Your excellency, then as head of State,you felt unhappy with the political structure as you highlighted in your speech back then in 1983.

Indeed, the story has even gone worst now, without hope insight, please sir, consider the pains that sowore might be trying to express.
We all cry everyday for freedom from poverty, insecurity, unemployment, poor health conditions,ethnic and religious intolerance, freedom from police harassment of our youths on a daily basis just to mention a few.

We cannot totally agree that all is well,when more than 10% percent of our population have left the country in search of greener pastures, while some of our youths are being killed everyday outside our border, What then is the hope of those left in the country? Our legislators have not added their voice of reason towards finding a way to bring about efficient and productive governance.

I want to remind you that Nigeria belongs to all of us, the objectivity of sowore actions need to be considered.

Please kindly treat Sowore like one of your sons, whose ultimate goals is to have a better society, I am human and I feel the pains of millions of Nigerians who sleep every day without a meal, blinded by an hopeless situation. Please sir. on behalf of the voiceless listen to the voice of reason #freesowore and make Nigeria better than you met it. 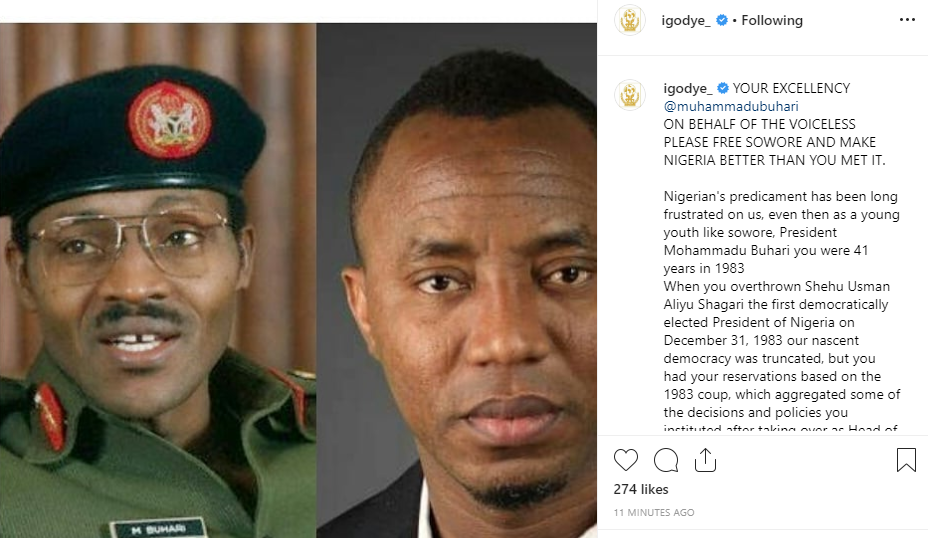